Cliven Bundy and his insurrectionist, subversive and rebellious followers

I was having fun at the [ https://www.facebook.com/events/688187351242203/] and got to read up on the Bundy ranch and the hijinks there. Got to learn about the Moapa Paiute Indians and their efforts to build a solar power plant to replace the coal fired one they have there. And to find out the real deal on who Cliven Bundy is. I want to share my findings so I don't have to repeat the research.

One: The Bundies have not been on that ranch more than 60 years.

This article reports that:

"Clark County Recorder documents show the 160-acre Bunkerville ranch Bundy calls home was purchased by his parents, David and Bodel Bundy, from Raoul and Ruth Leavitt on Jan. 5, 1948. The purchase included the transfer to the Bundys of certain water rights, including water from the nearby Virgin River. Cliven Bundy was born in 1946."

So his claim that his family has been on that ranch since the 1870's is a lie.

Two: The land that they are claiming is not their land and never was.

"1998 opinion from U.S. District Judge Johnnie Rawlinson" found that "it wasn’t until roughly 1954 that “Bundy or his father or both have grazed livestock on public lands owned by the United States and administered by the BLM.”"

So the land wasn't his before 1954 by squatters rights either.

Three: They are scofflaws not victims of Federal Perfidy

The Los Vegas Sun reports on the amount that Bundy owes as follows: Question "How much does Bundy owe the Government:"

"A. Depends who you ask. He’ll tell you that he has refused to pay the BLM grazing fees since 1993, bringing his tab to about $300,000. But the government says he owes $1 million and will have to pay for the some of the round-up costs."

Alan O'Neill claims that Bundy is actually a bully

The Las Vegas Sun also reports an article from Alan O'Neill who had to deal with him in the 90's:

" I served as superintendent of the Lake Mead National Recreation Area for the National Park Service from 1987 to 2000. In 1993, we reduced the number of cows that could be grazed on the Bunkerville allotment to 150 because of the emergency listing of the desert tortoise as an endangered species."

The Republicans make fun of this and don't deny it happened.

Because Bundy refused to remove his cattle to meet the 150 level and ignored repeated requests to do so, his permit was canceled in 1994 and the allotment was closed to grazing.

"As the news coverage has reported, Bundy continues to graze his cattle and has refused to pay the BLM a grazing fee. The figure he owes the government exceeds $300,000. The estimate of cattle being grazed illegally since 1994 on the old Bunkerville allotment have ranged from 550 to more than 900."

So he's been violating the law since 1993. And he did contest it in court, but failed:

"It is unfathomable to me that 20 years after the Bunkerville allotment was canceled in 1994, we are still wrestling with getting his cattle off the range. And there were issues of overgrazing that allotment before 1994. It is my opinion that the BLM and the Park Service have done everything possible administratively to try to resolve the issue amicably. In addition, there are two federal court rulings upholding the agencies’ position, and the most recent ruling demanded Bundy not physically interfere with any seizure or impoundment operation."

Not that it made any difference to him.

Four: The right is trying to instigate insurrection 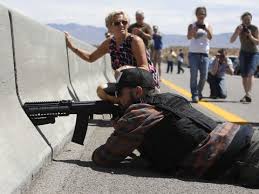 Bundy is a bully who has used his threat of a range war and to do “whatever it takes” to stop the government from impounding his cattle to scare public officials.

And that includes shooting marshals.

The implications are that he would resort to a gunbattle. And who wants to see another Waco? I was one of those public officials who were told to back off at one point because of concern for violence. 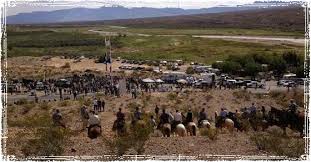 What Bundy is doing is a criminal act, and he should be accountable for his actions rather than be held up as a hero fighting the federal government.

But of course instead of supporting rule of law Hannity, Fox News and the Militia movement came to his support. But Alan continues:

Most of the grazing permit holders on public land are good stewards and law-abiding citizens, and Bundy is doing them a disservice with his actions. He is a perfect example of someone who publicly states that he abhors the federal government but who relies on it for his welfare.

He is grazing free on the public’s land to the detriment of the environment and the honest taxpayers who support his welfare lifestyle.

Five: The right is subverting the constitution

The Constitution states that:

"Treason against the United States, shall consist only in levying War against them, or in adhering to their Enemies, giving them Aid and Comfort."

Making war against BLM is treason under the constitution, not a second amendment right.

Six: The right is threatening armed rebellion in a lawless fashion.

Sean Hannity all but directly called for armed rebellion against the Federal Government.

Hannity has had him on the show multiple times and has encouraged his sedition. One example:

"My next guest, Cliven Bundy, is a Nevada rancher waging a battle against the federal government over his cattle grazing on public land which is overseen by the Bureau of Land Management"

And Hannity, endorsing him asked him how far he'd go, and Bundy said:

"My statement to the American people, I'll do whatever it takes to gain our liberty and freedom back."

In this April 15th clip he practically egged him on while blaming Harry Reid:

Seven: The Folks trying to build a solar power plant are the Moapa Paiute Indians

The Moapa Paiute, with the help of both father Senator Harry Reid, and son, were able to get what they needed to build a Solar power plant for selling electricity to Los Angelos:

The sun is shining more brightly on the Moapa River Indian Reservation today.

So while Cliven [Al from Married with children's prototype?] Bundy and his followers are full of incoherent rage and fear. The Moapa Paiute are feeling good because:

"Council members for the city of Los Angeles approved a $1.6 billion, 25-year pact Tuesday to purchase solar power from a company that will build nearly 1 million photovoltaic panels on tribal land."

Which is win/win for Nevada, the Paiute Indians, and Los Angelos.

"I just can't believe that we're actually going to have something like this on the reservation," Moapa Band of Paiutes Chairman William Anderson said after arriving at McCarran International Airport on a flight from Los Angeles, a few hours after the council made its unanimous decision to purchase power from K Road Moapa Solar.

Which is nowhere near the Bundy ranch.

"We are going to have a solar farm and jobs for our people," Anderson, 39, said about the 320 members of the Moapa band.

Just the maintenance on this will employ caretakers and electricians for years.

They will serve as landlords and provide sand and gravel for the project, the largest solar plant on tribal lands in the United States.

Which means that nobody is stiffing the Paiute (for a change), and everyone will benefit.

Expected to go online in 2016, the 250-megawatt solar farm will generate enough electricity for 118,000 homes more than 280 miles away in Los Angeles.

And though I'd like to see more solar cells on those homes, this ia great start!

Anderson said the farm consisting of some 910,000 solar panels will be built on 2,000 acres on the 71,680-acre reservation. It will be across from the tribe's Moapa Travel Plaza truck stop, west of the Valley of Fire exit off Interstate 15, about 35 miles northeast of Las Vegas. It will be southwest of NV Energy's coal-fired Reid Gardner power station, which the tribe blames for health problems.

Again, nowhere near the Bundy Ranch.

So this is a win/win deal for the Paiute. No Feds stealing their land here!

So why are the right maintaining that that is his dark goal?

The logic seems to be: Bundy is grazing on land that once was part of the Moapi Paiute reservation but was stolen in the 1800's. Obama and Reid helped the Moapi Paiute get some of their property back. Bundy's supporters are afraid the Indigenous want their land back out of guilt (since the previous owner probably helped pressure the Feds to steal it in the first place -- bundies only there since 40's) therefore in typical loopy Faux reasoning Reid (and the Indians -- but they won't say that) want the land back so they can build a solar power plant on it. Okay, I get the paranoia now. So now they send a faux reporter to the Reservation to elicit sympathetic comments about Bundy. Well I'm sympathetic with the old arsefart too. I understand how it hurts to give back nearly a million in grazing fees.

SNOPES debunks the allegations against Harry Reid here in an article [http://www.snopes.com/politics/conspiracy/nevada.asp]

"The site that ENN Mojave Energy was planning to buy in order to build a solar plant is nowhere near the public land Bundy has been disputing with the government, and ENN gave up the solar project and terminated its agreement to buy land to house it as far back as June 2013:

"A Chinese-backed company is pulling the plug on a multibillion-dollar solar project near Laughlin after it was unable to find customers for the power that would have been generated there, a Clark County spokesman said."

SNOPES notes that even Breitbart backed off this BS:

"Despite the obvious partisan gain to be had if Senate Majority Leader Harry Reid's son Rory (a failed 2010 Nevada gubernatorial candidate) had somehow been involved in a "land grab" affecting the Bundy family ranch operation — the facts just do not pan out as such. Indeed, Rory Reid did in fact have a hand in plans to reclassify federal lands for renewable energy developments. Just northeast of Las Vegas and Nellis Air Force Base, plans were drawn by Reid allies to potentially develop 5,717 acres of land for such use. While it would be fair to claim that such activity was in Bundy's relative neighborhood, the federal lands once leased by the family were more than 20 miles away, east of Overton, Nevada." [http://www.snopes.com/politics/conspiracy/nevada.asp#yZmJmCDLKCms2Rlp.99]

There is a lot more to write about. But this will do for now.

Email ThisBlogThis!Share to TwitterShare to FacebookShare to Pinterest
Labels: militia