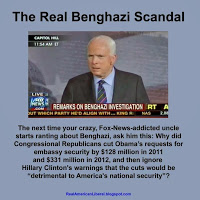 The only reason the attack on the USA embassy wasn't even more of a disaster is that it's defense was augmented by a nearby top secret black site which had more effective security. That is also why officials had to be discrete in talking about it. Congress cut funds to the State Department for security, but not to black sites, drone attacks or secret forces covertly invading friendly nation and foe alike. Our State Department workers risk their lives every day by actually talking to people.

The Republicans would rather shoot at them.