Trump's Practice of the Big Lie

The Big lie is an old technique. I've written about it so many times in blog posts and similar I hardly need my references anymore: Orwell, Hannah Arendt, and of course the practitioners; Hitler, Stalin, Orwell, etc... The practitioners of the big lie are cagey about what they are doing. They will talk about it, but always in the context of defaming opponents. But Hannah Arendt:

Trump isn't that different from those who came before him. He calls his version of the Big Lie "Truthful Hyperbole". To him if it is supposed to be true one day, or he thinks he might be able to make it true. Then it is "Truthful Hypberbole." He calls it "truthful" because he can carry off the affectation of "truthiness" while telling his abusive lie. Lies are lies, not hyperbole. But to Trump... 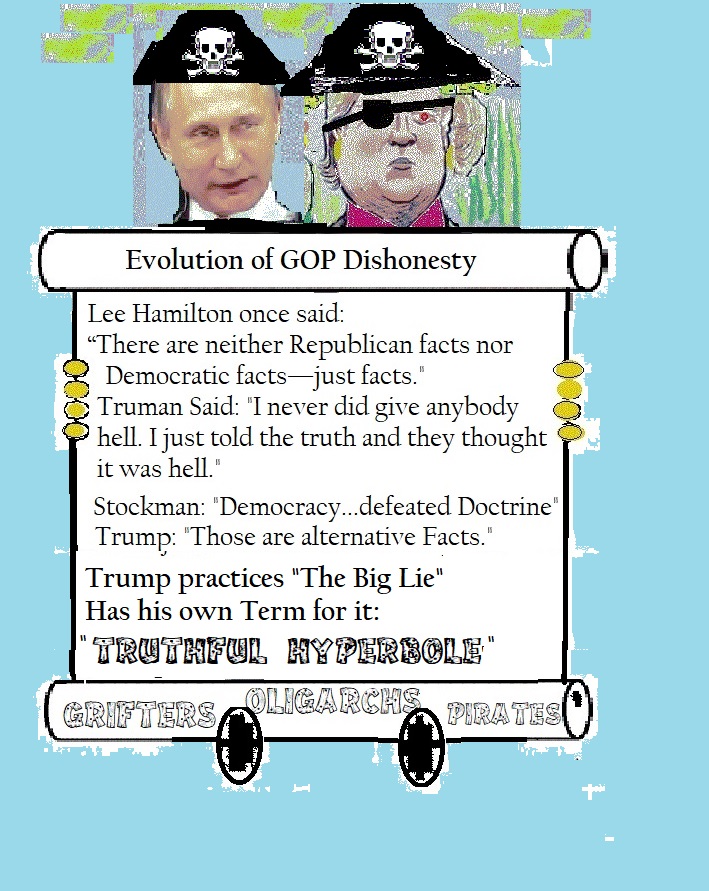 Posted by Chris Holte at 5:25 PM No comments: Links to this post 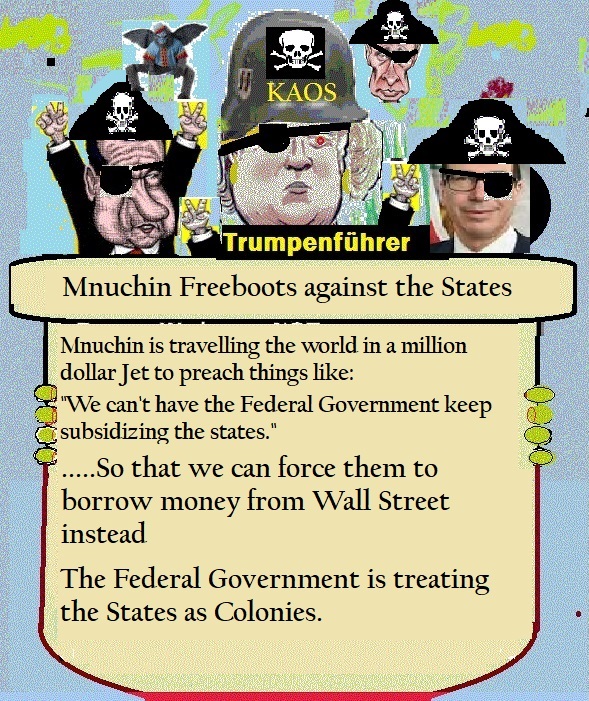 
"We can't have the Federal Government keep subsidizing the states."

Which is a very unconstitutional thing to say for two reasons:

Therefore the money power rests with the Federal Government, which in the Constitutional Government scheme is in service to These, not their tyrannical overseer. The Federal Government under the 14th amendment has some oversight rights as the collective will of the whole body of the people of the United States, but because states don't have the independent power to issue notes to pay their debts it should be the role of the Treasury through a well constituted Federal Reserve to front the money. Then taxes can collect any unmerited or unearned incomes from their spending on infrastructure and other citizens needs. Mnuchin's schema would treat them like Greece, allowing taxes and Wall Street to siphon off wealth and then punishing them for the vanishing tax receipts from a vanishing tax base. It would push all the costs of government onto States while continuing to let Wall Street eat the revenues.

Mnuchin's plan treats States as Colonies. He and Trump seem to be testing it on Puerto Rico. The combination of centralization and wealth siphoning by loan is toxic. We need to stop him. Mnuchin's idea is poisonous.

I've got a lot more to say so I may update this post later with more information.

Posted by Chris Holte at 5:59 AM No comments: Links to this post

Still Wrong the Day it was Decided

Updated Commentary on Wrong the Day it was decided

The trouble with divining "original intent" is that it can lead to anachronistic interpretations and faulty reasoning beyond simply anachronism fallacy! The trouble with the terms "cannonical" and "anti-cannonical", is that they try to apply religious terminology to what is essentially a human endeavor. Legal systems are designed to bind society to the wisdom and prescriptions of accepted law. But human interpretation is still necessary and so, just as the Plessy Versus Fergussen or Dredd Scott decision were later overturned; our understanding of law can and must change as society evolves. The constitution is a dead document unless we who live apply its principles as well as its dictates rationally and are able to use legal process to change those that must change. In some cases that might mean the amendment process, in others it is a matter of definition. The author of "Wrong the Day it was Decided" sought in the concept of "Constitutional Historicism" to bring principles of textual analysis to judicial decision making.

Read more »
Posted by Chris Holte at 1:52 PM No comments: Links to this post

A right to Vote but not to have your vote counted

It goes back to Bush V Gore 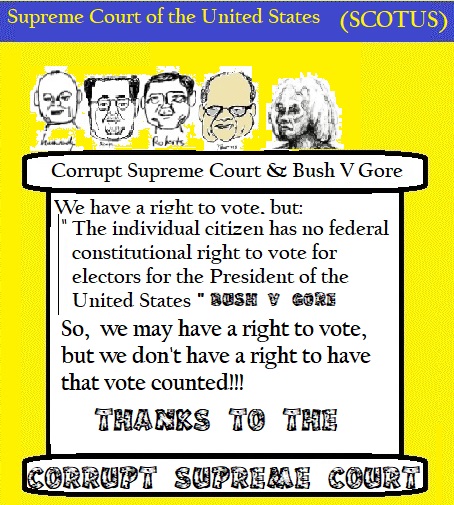 In 2000 and 2001 the Supreme Court affirmed the corrupt process of Florida and other states in Bush Versus Gore. In Bush Versus Gore, they conceded that they could stop a recount despite it being obvious that votes were not being counted:

Nevertheless they held that actually counting those "uncounted legal votes" violated the "equal protection clause of the constitution. Part of their justification was lack of time, due to SCOTUS stopping the recounts earlier. But the real corrupt heart of Bush Versus Gore, is something that is itself eitter unconstitutional or poorly constituted because they held that:

“ The individual citizen has no federal constitutional right to vote for electors for the President of the United States unless and until the state legislature chooses a statewide election as the means to implement its power to appoint members of the electoral college. U. S. Const., Art. II, § 1 ” [Bush V Gore]

So while the constitution states that no one can be denied a right to vote "on account of race, color, or previous condition of servitude, or sex;" there is no requirement for that vote to be counted in electing the President per Bush Versus Gore. The decision was so badly decided that all subsequent examples of corrupt election process are all predicated on it. The same corrupt Justices who decided it would decide that bribery is speech.

SCOTUS could over-rule the State Supreme Court on the grounds that their SCOTUS ordering a recount violated "the equal protection clause" despite the reality that the Constitution does give those powers and responsibilities to the States and they didn't have standing in the first place. They could over-rule our own Constitution and the State Constitution to disestablish existing laws while inventing new theories of bribery=speech. They'd go on to over-rule 100+ year old corruption laws on equally specious grounds. Sandra Day O'Connor ruled with the majority on this case, she later regretted it. But it gave us 8 years of Bush and that gave us a Court even more corrupt than the one she was on. It also gave us a fraudulent war, massive economic fraud and speculation and an economic collapse.

This decision started me on being alarmed about our politics. The alarm has only grown as the GOP has become more and more authoritarian and the Corrupt Court ratified their actions.

Posted by Chris Holte at 5:12 PM No comments: Links to this post

To Govern utilities well local government must be involved

Local Government is application of Principles of Subsidiarity

The Principle of Democratic Subsidiarity is based on the notion that:

“Subsidiarity is an organizing principle that matters ought to be handled by the smallest, lowest or least centralized competent authority.” 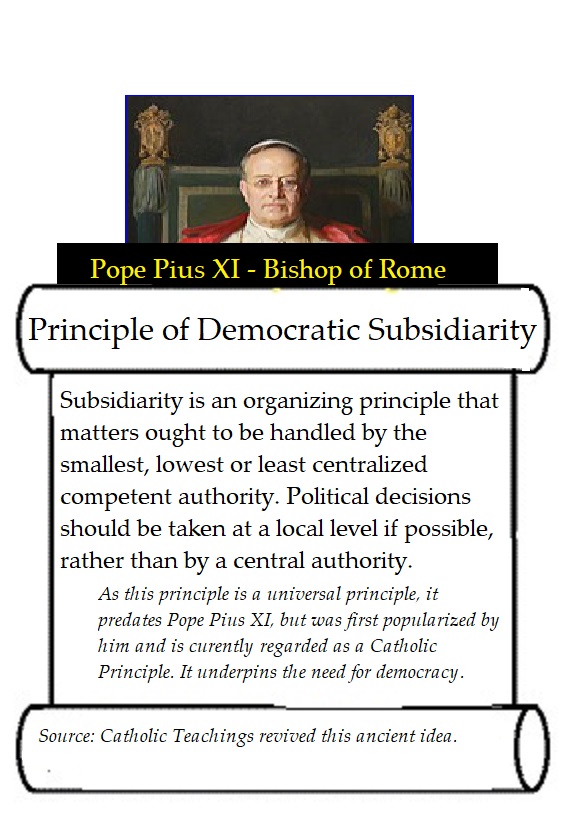 In Application in democratic societies, it is why the Constitution guarantees a "Republican form of Government to the States" and why the states should guarantee republican forms to local government. In application to public utility it why large monopolies and centralized utilities fail to deliver well. Utilities should be organized on republican forms with local governance. Central Governance is good for general, universal principles, but not for their specific application. One of the drawbacks of centralization is the converse of subsidiarity principles, that central government is often incompetent to handle local matters.

Read more »
Posted by Chris Holte at 5:28 PM No comments: Links to this post