Untangling the Bait and Switch of Friedman/Rand's ideas about Capitalism

If you listen to Milton Friedman in this article, he makes some points that sound perfectly rational until you deconstruct them a little: 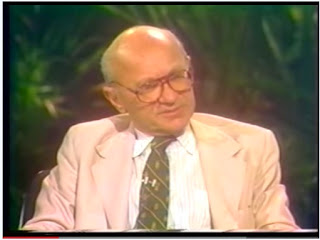 "Is there some society you know of that doesn't run on greed?"

Greed is undue hunger towards power and wealth, and while there are individuals in every society who "run on greed", my own observation is that the majority of people are rarely motivated by greed, or solely by greed. Many medical personnel are primarily concerned with saving lives. People join the military and give up their lives for their country. If their leaders "run on greed" not so the cannon fodder who they direct into battle. And I've met a few Generals and it wounds them to direct young men to their deaths. A dear friend of mine was the wife of one of the few suicides in WWII because of Post Traumatic Stress from the loss of lives on a beach front in Normandy. The man was incredibly honorable. No greed doesn't dominate everyone and it has the power to corrupt everywhere it does dominate. So claiming that Capitalism is good because "greed is everywhere" is a deflection. We now know that Russia and China both run on Greed, but they've also transformed themselves into Capitalist systems so what he was saying to Phil Donohue might have made sense then but in hindsight the fact that they ran on greed didn't make capitalism look good, just showed the bait and switch nature of communism. Next he notes that:

"The World runs on individuals pursuing their separate interests."

This is true, but successful companies run on individuals working together to pursue their common interests. And men of the enlightenment maintained that tyranny and corruption are related to men pursuing "private, separate interests" [Locke] when they should be upholding some kind of public trust. Indeed Locke pretty much demonstrated that common interest ultimately protects the individual interests of people. So the world running on "individuals pursuing their separate interests" denies the important utility of common interests in an effort to protect the notion that somehow greed is a good thing.

Indeed individual success depends on governments that let people be successful. We need a level playing field, not oppressive taxation and over-sight. And we need moderation, not extremes. A little greed might be good but a lot of greed is very very bad. And nobody ever has objected to free enterprise when it doesn't involve swindles, external costs, or misery. What people object to is freebooting. Privateers who engage in crony capitalism, nepotistic capitalism or use of government control to run monopolies. People don't object to a fair and just system. They object to a rigged one.

Milton Friedman goes on to assert that:

"Einstein didn't construct his theories on orders from a bureaucrat" and "Henry Ford didn't produce his cars that way."

Which again sets up a straw argument, since most large capitalist enterprises become bureaucratic. Henry Ford produced his cars using a corporate bureaucracy that took orders from him. He essentially was a near dictator of Ford Motors company, subject only to the objections of his board of trustees. So if bureaucracy were only a feature of socialist countries his argument might make more sense but otherwise he's making a false contrast. What is true is that individual initiative is what has created most great innovations. Sometimes they've been purely individual efforts as in Einstein's thought experiments, but more often they've been collaborative efforts as with Einstein and his first wife, or Edison with his teams of scientists and technicians. Genius has always been 99% perspiration and 1% inspiration. He's claiming individual initiative for the capitalist system when capitalism has mostly provided financial support to inventors, such as Robert Fulton who had to share credit for one of his steam engine designs with a banker because the banker financed it. And modern capitalist enterprises have grown into bureaucratic monsters with armies of lawyers who think nothing of stepping on the entrepreneurs who try to compete with it.

His next comment is a bit of a whopper:

is a bit of deflection as the only reason masses escaped grinding in capitalist countries was that they organized themselves bottom up, fought for a share of the production, and the capitalists were wise enough to recognize it was in their best interest to share the loot. In the USA this was easier because relatively good government and lack of a long established aristocracy meant that many people could emerge from poverty by acquiring an education and inventing things. Up until recently most engineers and many scientists were self taught. There was a time still alive when I was a child when almost everyone in the USA dreamed of inventing something that would make them a millionaire; starting a business in a garage. So local free trade, access to markets and INDIVIDUAL access to finance is necessary for the "masses" to escape grinding poverty, but we can thank the kind of capitalism where everyone has the opportunity to become a capitalist -- and good government -- that makes markets real free markets, for that. Capitalist systems have also been agents for extreme oppression and slavery. The USA south was a place of grinding poverty for the masses because people could not even own themselves much less their inventions. The North was a place of grinding poverty because capitalists exploited their labor instead of paying a man what his labor was worth.

So while he's telling the partial truth when he says that "there is no system that can hold a candle to the wealth and productive capability produced by a free enterprise system" the key to that being reality is individual freedom, and individual enterprise being valued and rewarded. And that requires conditions of democracy, good representation, and ethical government. So a "greedy" capitalist system, in the end, is the same worse as any greedy poorly optimized system.

And when Phil Donohue asked about why the Capitalist system doesn't reward virtue (or always hard work or the innovators who come up with new enterprises) his only answer is to attack communist systems and our own system for not rewarding virtue. I find that dishonest. Fact is we need a system that rewards virtue and to have that we need a system that is fair as well as productive, and that levels the playing field and encourages good government. To do that we need the demos active in government, and active in business government. And that by definition is not pure capitalism. Pure capitalism is as tyrannical as pure marxism or fascism.

Anyway those are just my opinions. All citations are from memory except the quotes and paraphrases from Friedman's interview with Phil Donohue.