I fall in love a little more with you every day,
you who smile a bright smile and lead me to learn something new.
And you who cry a little bit, because you are passionate for your loves.
And you who love someone so much, that you risk everything for their touch.
.
What else can I do beyond fall in love with you?
I can share a momentary smile, and maybe something new.
I can love you a little while, and cry when you go away.
And I can love you so much that I tremble at your touch.
.
And I can love you from afar, just as you are.
There is nothing really new, except every moment anew.
And we are passing forests frightful, with shadows tall and long.
But when we walk together hand in hand, we see mountain giants strong.
And realize that all this world is grand, and with love we won't go wrong. 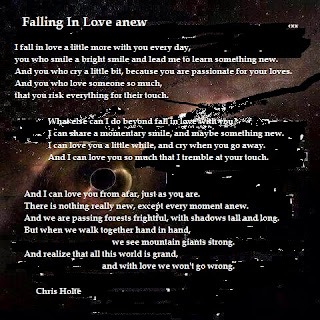 Posted by Chris Holte at 5:21 PM No comments: Links to this post

The real right to property is contingent on "reason" -- Locke 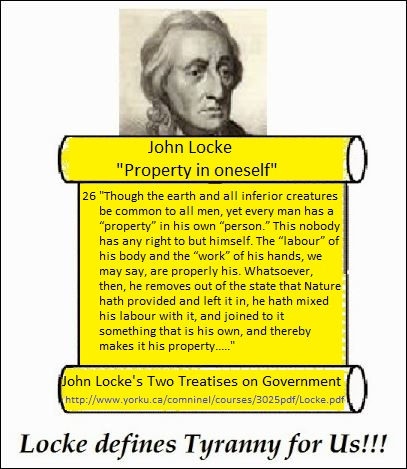 I was astounded when I read numerous articles that claimed to found their arguments on John Locke, and then compared them to what he actually said. The difference was astounding and the deception goes back centuries, definitely to Edmund Burke [See the article: "Edmund Burke Versus John Locke"], but probably further back as well. So far reading him carefully I've found that he basically makes a very modern case that:

Rights come from below: John Locke's exegesis and what it tells us.
Folks don't realize that it was John Locke who first translated the concept of "civitis" as "commonwealth."
The Concept of Commonwealth as antidote to Tyranny (and essentially introduced a new refinement to the concept).

Read more »
Posted by Chris Holte at 4:52 PM No comments: Links to this post