Professor David Ellerman wrote some things that really, really impressed me and I want to summarize some of what he's saying that is relative to me. Starting with the Following Table, which expresses the truth table of what constitutes justice and injustice:

In talking about slavery, Ellerman points out how slaves were held legally liable as persons for their individual acts, even if coerced, while were denied personhood in all the ways that a human deserves to be treated as a human. When seeking freedom or rights they were not persons. When they violated any law, they were suddenly persons. Slaves were in a Catch 22 situation.

The Catch 22 of Unjust Legal Systems

In the book "Catch 22", Joseph Heller, built his story around a plausible provision in the General Orders for the Air Force stationed in Southern Italy and bombing the Germans from there. This provision was known as the "Catch 22".

“by applying for exemption from highly dangerous bombing missions on the grounds of insanity, the applicant proved himself to be sane”

Joseph Heller was setting up a situation where the insanity of war was no bar to being sent out on bombing runs. He went on the book to describe a whole series of "Catch 22" situations that soldiers were put into while fighting in Europe.

The Truth Table of Catch 22 Situations

The term has become a regular expression in modern English. A Catch 22, generally, is any provision of law or policy that sets up no-win situation for those trying to comply with them. No win Situations are by definition unjust.

Any Law is only just when the person who is held responsible is actually in fact responsible. Catch 22's are by definition unjust and therefore an instrument of oppression and repression. That ought to be tautological, but in our corrupted times, both type one and type two injustice are common, sometimes due to failures in the discovery process for seeking the truth, but also because modern governments employ oppressive and/or Fraudulent legal theories.

If a decision is coerced, the claim that it is truly consensual is a fraud

David explains the table as:

“analogous to Type I and Type II error in statistics”

But it really is also a logical truth table. Injustice is also illogical. Sophisticated arguments may give the arguments a patina of truthiness, but sophism is merely an ancient greek word for making a con. If a person is blackmailed into doing something, only a sophist of a lawyer would insist that his decision was not coerced or was truly consensual.

“Historically, the sophisticated arguments for slavery and autocratic government were consent-based in terms of implicit or explicit contracts. And the legalized oppression of married women was based on the coverture marriage contract.” [Ellerson-Case]

Moderns forget that the cases against Abolition of Slavery, worker rights, even women's rights, all were framed on the argument that somehow those forms of oppression were actually (despite the facts) oppressive.

“the critiques developed in the abolitionist, democratic, and feminist movements were not simply arguments for consent as opposed to coercion, but arguments against certain voluntary contracts, e.g., in the form of inalienable rights arguments.”

These inalienable rights arguments focus on the fact that labor cannot be divorced from either personhood or capital. The abolitionists argued successfully that labor cannot be alienated from personhood but is inseparable from it. Thus Alienating a persons labor from his personhood degrades the person and is oppression, infringing on the very basic rights of the persons enslaved. Moreover, this is true even if the person agreed to the sale. The basis of that argument starts with recognizing the fraud of catch 22s, no-win contracts and of holding innocent parties guilty where they are not and guilty parties innocent were they are in fact guilty.

As illustrated by the spread of terms like "newspeak", "catch 22" and modern legal frauds, the job of the enlightenment isn't over. After Racist Permanent Bondage slavery was abolished. Other legal frauds were invented to justify "renting labor" wage slavery and other forms of legalized theft, oppression and injustice. All of which start with "legal fictions" which are in fact legalized Frauds. To stop such frauds from propagating we need lawyers and politicians to understand and adamantly argue that they are frauds. They've had, some of them, hundreds of years of normalization so they've gone from outright lies, to myths that are actually lies.

I have a lot more to say, but for the sake of clarity I cut this post down to a shorter version. And am writing out the case in separate posts.

The Type I and Type II Frauds of Corporate Personhood

Corporate Personhood legalizes both type I injustice by shifting fictional liability from guilty parties to a fictional entity, the Corporation, and type II injustice by (usually) letting the corporation get a criminal law pass when the people within a corporation kill, defraud or commit felonies. As Ellerman says:

By reviewing the arguments of the Abolitionists and pre-Marxist activists we can correct the mistakes of 150 years of sophism and neo-liberal arguments.

Posted by Chris Holte at 8:30 PM No comments: Links to this post

Email ThisBlogThis!Share to TwitterShare to FacebookShare to Pinterest
Labels: Personhood

The Second Amendment is an Auxiliary and Subordinate Right 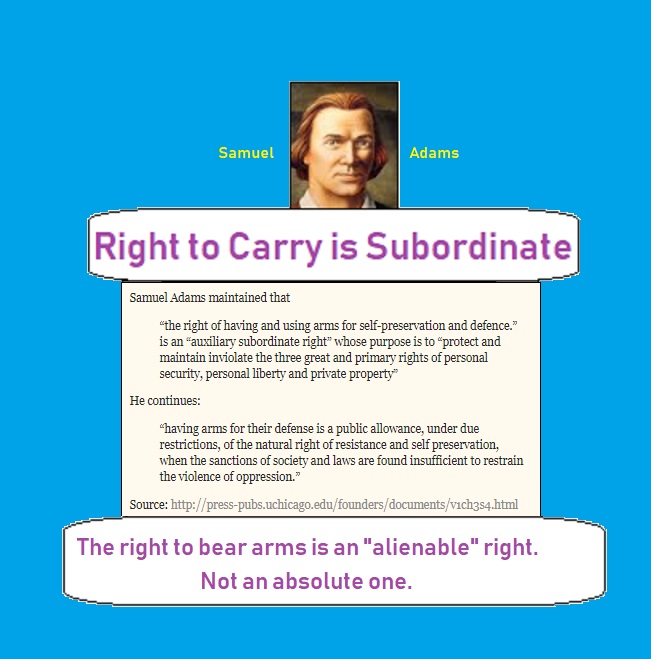 The Right to Bear Arms is Auxiliary and subordinate to the right to own oneself, to liberty and security.

If people don't feel secure in their persons and possessions, the country isn't secure. If some people are secure (Oligarchy), the majority are less secure. The "Right to Bear Arms" is auxiliary, but necessary to, the right to participate in governing ourselves. Samuel Adams referred to the Right to “have and use arms” as Auxiliary and Subordinate to the rights to personal security, liberty and property.

In ancient times the greatest power of common people was that the Government had to ask them to fight for them.

As I've said elsewhere owning and using weaponry for self defense is an "auxiliary and subordinate" right. Samuel Adams quoted Blackstone and Parliament when he wrote, referring to the Glorious Revolution when English Parliament overthrew the Stuarts:

“At the Revolution, the British Constitution was restored to its original principles, declared in the bill of rights; which was afterwards passed into a law”

Note the wording "restored" and "afterwards passed into a law", is expressing the principle that these human rights existed all the while in their denial, which is the reason that any right to own and use arms other than in the military is actually linked to the 9th and 10th Amendments and the product of hundreds of years of resistance by Citizens against Government Oppression. The right to bear arms is the right to participate in the defense, and by logical extension, the governance of the country.

This was a principle that dated back to "Old England." Samuel Adams in an essay published in the Boston Gazette during the early stages of the rebellion in New England that became our Revolution referred to the right to “have and use” arms as part of a list of "auxiliary and subordinate" rights that only apply;

Which are rights that people have auxiliary, to resisting oppression:

These are only rights in a context of protecting the primary rights of:

“having arms for their defense” ... “a public allowance under due restrictions of the natural rights of resistance and self preservation, when the sanction of society and society are found insufficient to restrain the violence of oppression.”

This right to bear arms is an auxiliary right necessary to resist "the violence of oppression", not a right of mere disaffection, or to engage in oppression or ethnic cleansing. If there is no oppression and no occupying military, there is no need to possess and sue arms. Hence the word "auxilliary." 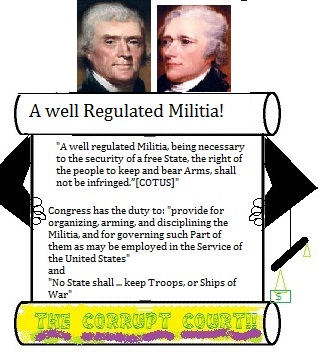 To the nascent Rebellion, it also was a response to the presence of “Military Troops” due to the fear that;

“Violence is always to be apprehended from Military Troops”

If you talk to any gun nut, they know full well this history, and that the great fear of "Standing Armies" was what drove the founders of this country to create a second Amendment. But they interpret that fear the way Southerners did in the antebellum period before 1865. They saw it as a right for the Free Men (they expanded the franchise from the Gentry) and Gentry to defend their property, which included other people. They didn't see slaves, peasants, indentured servants and the property-less worker, as full equals in society. But their arguments saying "All Mankind" meant that this was a deluded attitude towards their own universal principles. The struggle to make universal universal principles continues.

On Standing Armies:
http://files.libertyfund.org/pll/quotes/192.html
Most quotes from “Armed In America,” by Patrick J. Charles:
https://www.amazon.com/dp/B06Y56WFY6/ref=dp-kindle-redirect?_encoding=UTF8&btkr=1

Posted by Chris Holte at 4:01 PM No comments: Links to this post