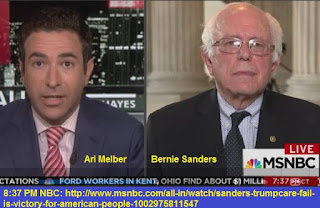 I still, kinda sorta, like Bernie Sanders. But he revealed himself to be no Saint Bernard during the election, and so I'm a little alarmed with some of his behavior as he's got a one tracked mind and for other reasons. Last night my suspicions about one piece of the election were confirmed. Though I don't expect him to ever admit it.

I don't know if he meant it the way it sounded But what he said verified he knew Russian Trolls were trying to instigate his followers.

What got me was Bernie Sanders admission last night he knew Russians were helping him 2015-2016 by manufacturing lies.

He was on TV with Ari Melber standing in for Chris Matthews. It was near the end of the broadcast and a short segment, but it hit me hard. I had to go back today and listen to it again on NBC [Segment 8:37 Pm 7/18/2017].

Ari Melber started the segment by asked him a direct question:

"...As You know, some of the hacks helped Donald Trump, and some of them involved the debate between you and Hillary Clinton..."

He then goes on to recount the story of one of the released emails. He had criticized Debbie Wasserman Shultz... and the Russians had released an email that stated, among other things,

"He isn't going to be President"

And he had used that email, and others, as justification for calling for her to be removed as DNC chairman. He also had used those emails to savage the Democratic party, and is still savaging them pretty regularly. However, Ari next said:

"When you look back at what happened,... right before the convention,... what we didn't fully know then, that that is so understood now, is that those were partly operations of Russia..."

Then he asked the question I've been wondering if anyone was ever going to ask Bernie:

Mike Drop.... "Would you do it differently then [if you'd known] then what we know now?"

But Ari, who is a heck of a Reporter, doesn't let him get away with it!

"Did you know then, that that was their [] design, to leak these emails,... so that there would be more rifts in the Democratic party?"

Bernie closed his eyes then started to mumble but then the says:

"...Well of Course we Knew that! ... they were trying to cause divisiveness within the Democratic Party."

And he is all to happy to help them.

Then Ari asked him a relatively softball question, quoting our Traitor in Chief's comment about how:

"Any Politician would take meetings with foreign nationals offering dirt on their opponants, do you agree with that?"

I wasn't going to comment on his answer to that question but then I noticed his micro-expression while I was writing this: 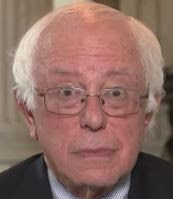 The question shocked him! Did he think someone had info on him meeting someone? Then he smiled. Ari had given him an out by referring to the idea as absurd. Even so his reply was interesting for what it said, and what it didn't say:

"Of Course it was absurd. We need to [unintelligible]... ambassadors and people from countries all over the world" ... "that is what you should do."

Which avoided answering the question. Then he continued...

"But that is very different from breaking the law...

Bernie wasn't innocent in Russian Attacks on Hillary. He knew what they were doing. Is there more? We'll probably never know. I know it is "confirmation bias" to draw any conclusions from this interview.... but... at the very least Bernie is confessing he played Russia's game knowing they were using illegal emails and possibly doctored messages. So not innocent.

He will never get my primary Vote. And God help the Country, much less us Democrats, if he runs as third party or wins the primaries.

Propane Jane has done some rapier like work on the Sanders movement and some of the weaknesses of Sanderism.
When Racism gets in Socialism
https://storify.com/docrocktex26/when-racism-gets-in-socialism
Sanders criticism grows pointed at black community forum
"“I said ‘black’ 50 times,” he said. “That’s the 51st time.”
But, Sanders said, the issues at hand are more about economics than race.
“It’s not just black,” he said. “It’s Latino. In some rural areas, it is white.”
unbearable whiteness of being Bernie: "This outcome has clearly frustrated Sanders. He and his supporters cannot understand how his “democratic socialist” campaign is losing the black vote – and not gaining more traction with his attack on the 1990s, when even the Clintons have repudiated parts of their record in backing a tough-on-crime bill many blame for furthering the epidemic of mass incarceration."

And since the election he has only doubled down on efforts to demonize, not only Clinton but the "cosmopolitan" orientation of much of the Democratic party, by focusing on a "my way or the highway focus on class warfare ideas. Those are a issue, but not the only one.

"But Hillary Clinton’s support among African-Americans only surprises whites who caricature black politics as blindly radical, and radicals blinded with rage who unfairly blame Bill Clinton for the mass incarceration problem. The Clintons’ relationship with the African-American community has been deep and mutually beneficial, and it’s showing in the election tallies. Distorting the historical record ignores both Clintons’ warm ties to African-Americans and their impressive contributions to racial reconciliation, especially in the 1990s."

Email ThisBlogThis!Share to TwitterShare to FacebookShare to Pinterest
Labels: Sanders