Trump is following an Old playbook. 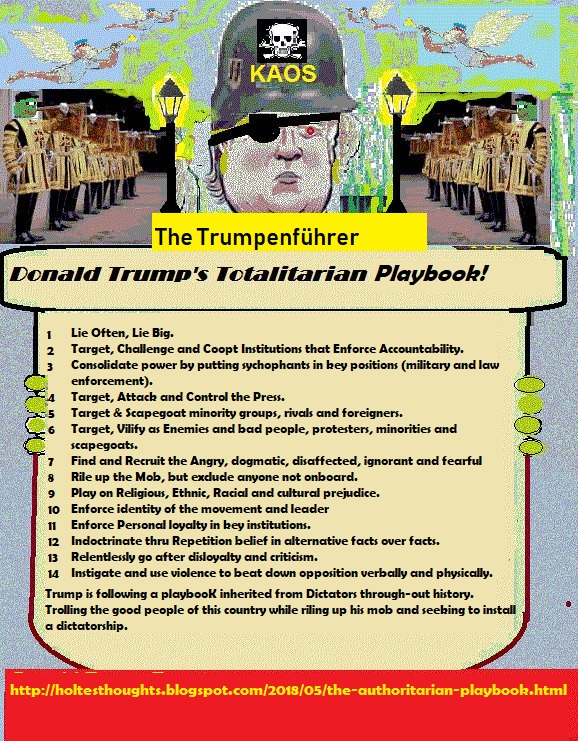 The Dictator's playbook is old. This list is inspired by an article in "Raw Story," but it is a list I already had so this is my version. I've been writing on this for a long time. So this post is a place to put related posts.

From Ancient Greek city states (probably further back than that, but we have stories of them), tyrants always do certain things.

One is they usually use the military & Government for their private benefit in the process convert them from citizens institutions to ones representing themselves. That is why so many tyrants emerge from military forces. It's also why aristocracy emerges from military force. The term "alloidial" ownership comes from a history of strong men occupying and controlling territory by military forces. Most of the above list, is really about converting principles of good government to principles of private, separate advantage [Locke's definition of Tyranny] and stocking the government with yes-men (sycophants). It is difficult to be a tyrant without complete control over government.

Two, they need an enemy and thus warfare and conflict, in order to subjugate the population. Psychologists will tell you that fear shuts down people's higher powers of reasoning. This is no accident. Dictators and their aristocratic children, thrive on conflict. That is another reason so many emerge from the military. Defaming, scapegoating, attacking people outside the culture, all are tried and true methods to indoctrinate and control the people who otherwise might question their other actions. In English speaking countries this is called the "Tory Tradition" since it was the method which James the First used to unite the sub-regions of Britain. The word Tory comes from "pursuer" and was a pejorative created by their enemies (hence they call themselves liberals, libertarians or conservatives and never Tories) to describe their behavior as "highway Robbers" or pirates (pursuers). Fear makes Nationalism mandatory. Nationalism unites masses and mobs.

Three, People aren't naturally stupid. They have to be dumbed down with lies, propaganda, misdirection and Gaslighting. See [Propaganda and Totalitarian]

It is hard to be Exploitive and Manipulative while pretending to be a paragon of virtue and accusing people of being evil or "bad people," So they have to also be Amoral and Dishonest in their real inner lives.

Five, Finally, they know that not everyone is going to be convinced so they seek to recruit people into EMAD behavior as Flying Monkeys or proxies for themselves. These supporters lie for them, spread false messages, not because they believe them themselves, but because they see a reward in the future for doing so. Those they can't convince to join them, they destroy. Eventually many of the "flying monkeys" are motivated by fear of reprisals more than dreams of some reward. This is why authoritarian regimes become "rule by the worst" [kakistocracy], they put a premium on loyalty over competence and they recruit sycophants who secretly despise their own system but exploit it and steal from everyone they can. [Kleptocrats]

Five, Authoritarian regimes seem to work, because people are willing to indoctrinate themselves based on authority. Also because they instill fear in everyone of what happens if they don't cooperate. Many would rather believe a smooth tongued con artist narcissist than "their own eyes" and would rather be told what to think than reasoned with. The rest get attacked for not seeing what a lovely ruler the person is.

They are self destructive because nobody is productive when they are stealing and double dealing.

For more information on John Locke and his relationship to other people read any of these posts:
Spencer Versus Locke and Henry George
Edmund Burke Versus John Locke
Locke Talked of the Importance of the Collective
The Concept of Commonwealth as Antidote to Tyranny
Commonwealth According to Locke
The Real Right to Property is Contingent on Reason
Common Property and the Commons
Rights Come from Below
Ayn Rand Argues against the Enlightenment
John Locke on the Virtues of Liberty
Tyranny Definition - John Locke