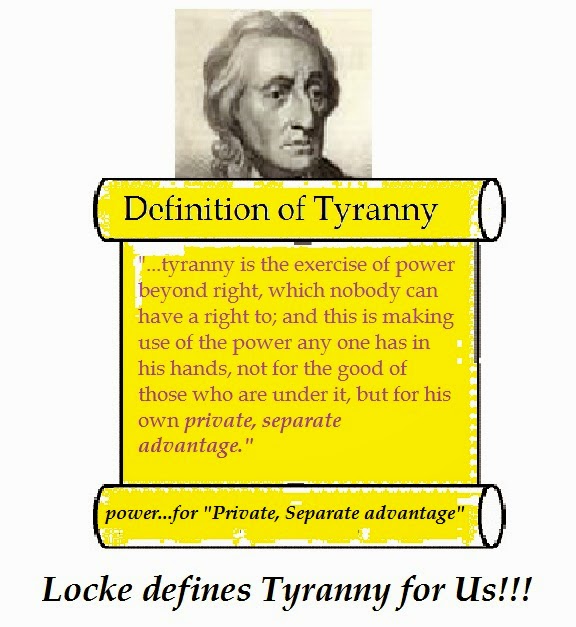 "199. As usurpation is the exercise of power which another hath a right to, so tyranny is the exercise of power beyond right, which nobody can have a right to; and this is making use of the power any one has in his hands, not for the good of those who are under it, but for his own private, separate advantage. When the governor, however entitled, makes not the law, but his will, the rule, and his commands and actions are not directed to the preservation of the properties of his people, but the satisfaction of his own ambition, revenge, covetousness, or any other irregular passion."

I use this definition so often I wanted to place it somewhere I could footnote in other places.

An excellent source for the e-book is here:http://www.efm.bris.ac.uk/het/locke/government.pdf

For more information on John Locke and his relationship to other people read any of these posts:
Spencer Versus Locke and Henry George
Edmund Burke Versus John Locke
Locke Talked of the Importance of the Collective
The Concept of Commonwealth as Antidote to Tyranny
Commonwealth According to Locke
The Real Right to Property is Contingent on Reason
Common Property and the Commons
Rights Come from Below
Ayn Rand Argues against the Enlightenment
John Locke on the Virtues of Liberty
Tyranny Definition - John Locke